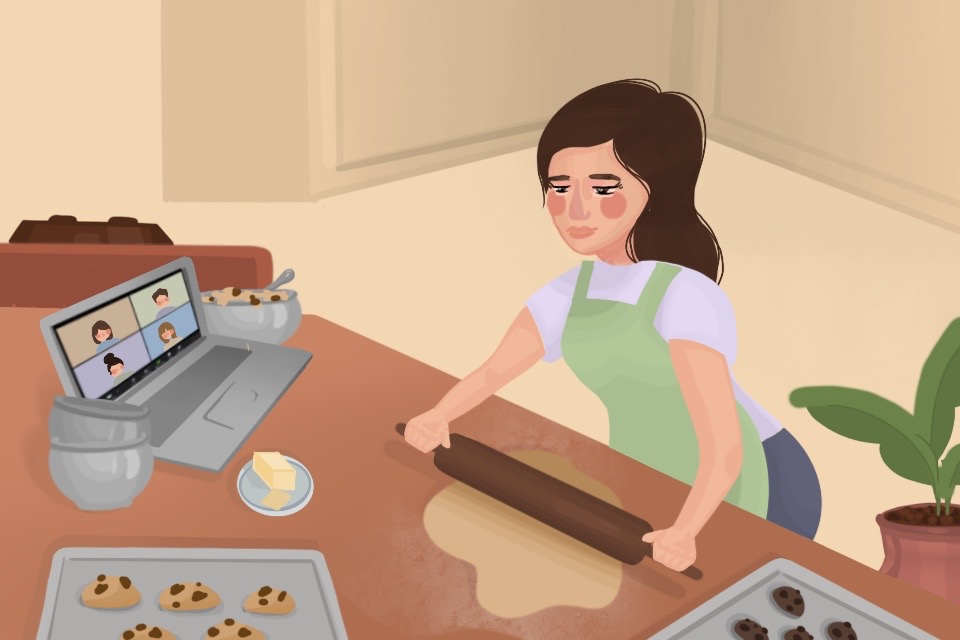 It’s 10 p.m. on a Friday night, do you have plans? A couple Friday nights ago, Yuval Dinoor, a Barnard College junior, threw a “powerpoint party”—over Zoom, of course.

In preparation for the get together, Dinoor asked all invitees to compose a powerpoint over the “most niche and absurd topic” that they could think of to present. Attendees prepared slides about the allergies of famous celebrities, favorite frog species from childhood, and even a step-by-step process for the correct way to unlock a door to somebody’s internship office. Titles ranged from “All about finance: a snake’s guide” to “Some dogs I met in Argentina.”

At the last moment, Dinoor surprised her guests by shuffling the powerpoints so that partygoers actually had to bumble their way through somebody else’s presentation. Powerpoint parties came to resemble a kind of amateur improv comedy show.

“It was just dope to see people from different parts of my life come together and have something to laugh about,” Dinoor says. 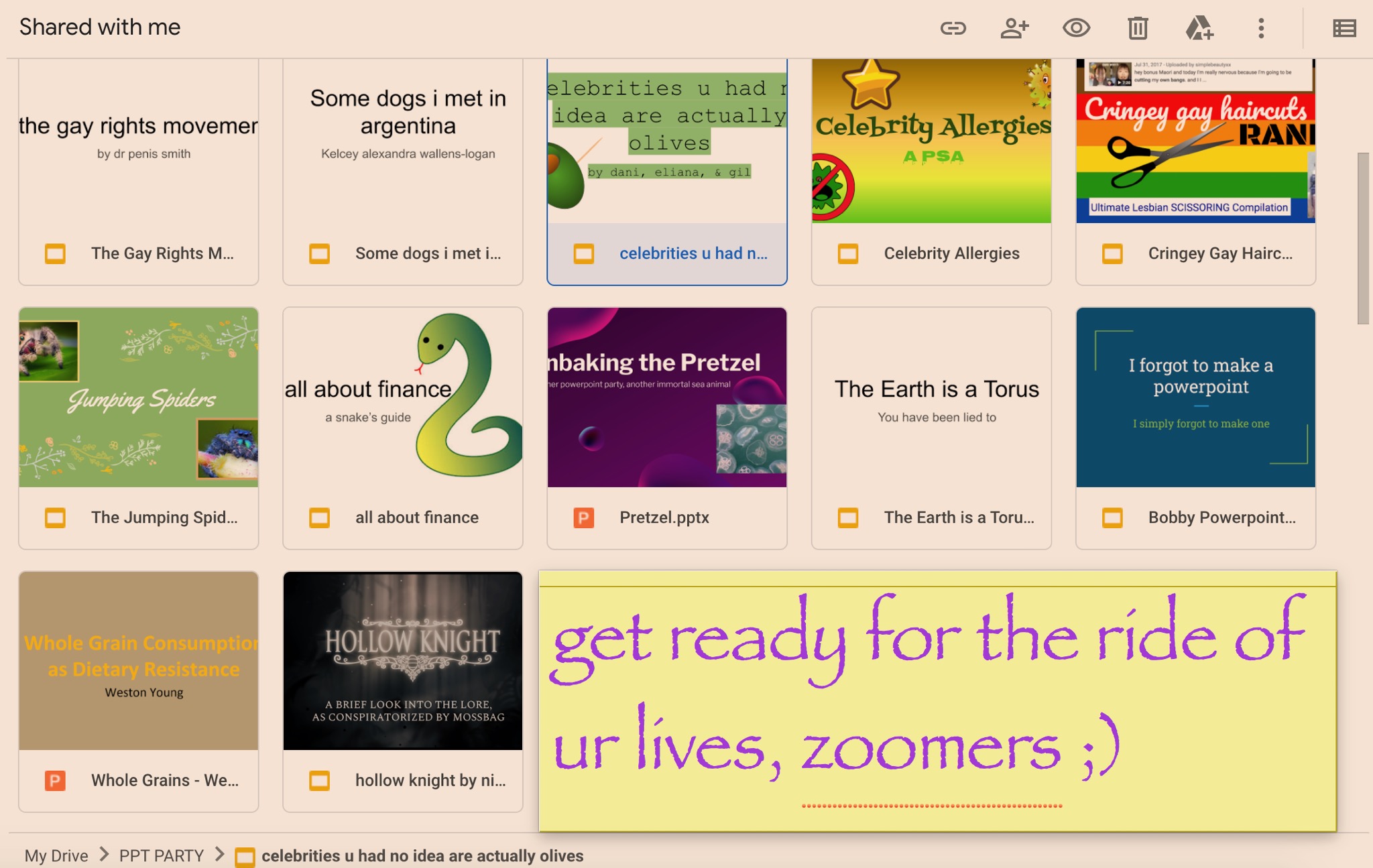 Months before, in December, Dinoor had thrown an in-person version of this same powerpoint party as a sendoff for her next semester abroad. In a pre-quarantine world, Columbia students on the eve of any given weekend might be found on corners near and far from campus. Shouting over the music at Mel’s, standing on the 116th subway platform in preparation for a Bushwick concert, or even nestled into a corner table of Butler Library.

But instead it is 10 p.m. on a Friday night in the era of the coronavirus quarantine, and so a significant number of students can actually be found somewhere relatively similar: in front of a laptop.

Over the course of a few weeks, Columbia quickly condensed all of the accoutrements that make up campus life. On March 12, in-person classes were officially suspended for the remainder of the spring semester. Then came Ivy League sports competitions, Bacchanal, and later Commencement for the class of 2020. Students scattered across the globe and began to adjust to college-without-college.

It is unclear still how well a wide variety of disciplines will translate to virtual learning. Yet, in the immediate wake of the virus, many students have found themselves with more freetime than they had experienced in quite awhile. So maybe even more unclear is what college Friday nights will look like.

“A lot of times someone will be like oh, what’s new? And you’re like literally nothing. And that can kind of stymie conversation,” Julia Schreder, a Columbia College junior, says.

While classes persist, there is less diversity in what the average Columbia student’s schedule might look like just by virtue of quarantine rules. “Pretty much we’re all doing the same thing every day,” Schreder says.

This means that the most conventional forms of virtual interactions aren’t quite cutting it anymore. Instead, students have started to populate their schedules with events that both mimic their regular social lives and give them something special to anticipate in this sea of monotony.

So how does one throw a successful Zoom party? An easily replicable idea can go a long way. Schreder hosts a movie watch party for her friends on Zoom every Wednesday. While Schreder likes movies, movie nights weren’t an essential cornerstone of her Columbia social life. But they do translate particularly well to Zoom, which makes them an ideal recurring event.

Other times, the best parties lean into their own nostalgia for life on campus. Paige Moskowitz, a Barnard College senior, grew up baking with her family, but at Barnard it evolved into a way to both handle stress and connect with loved ones; much of her college social life revolved around her suite kitchen.

In quarantine, while Moskowitz could bake solo—COVID-19 baking has, in its own way, gone viral, after all—she missed the community inherent in baking for others. To this end, Moskowitz recently led an informal class for friends on how to make the bread recipe that they were all well familiar with. “People like bread, and it’s very easy,” she says.

Moskowitz sent out a list of ingredients in advance so participants could carefully plan their grocery trips, particularly in light of certain shortages. And then a couple days later, over webcam, fifteen people assembled to take part in something between an instructional cooking show and a casual hang out. All of them successfully produced their own loaves. 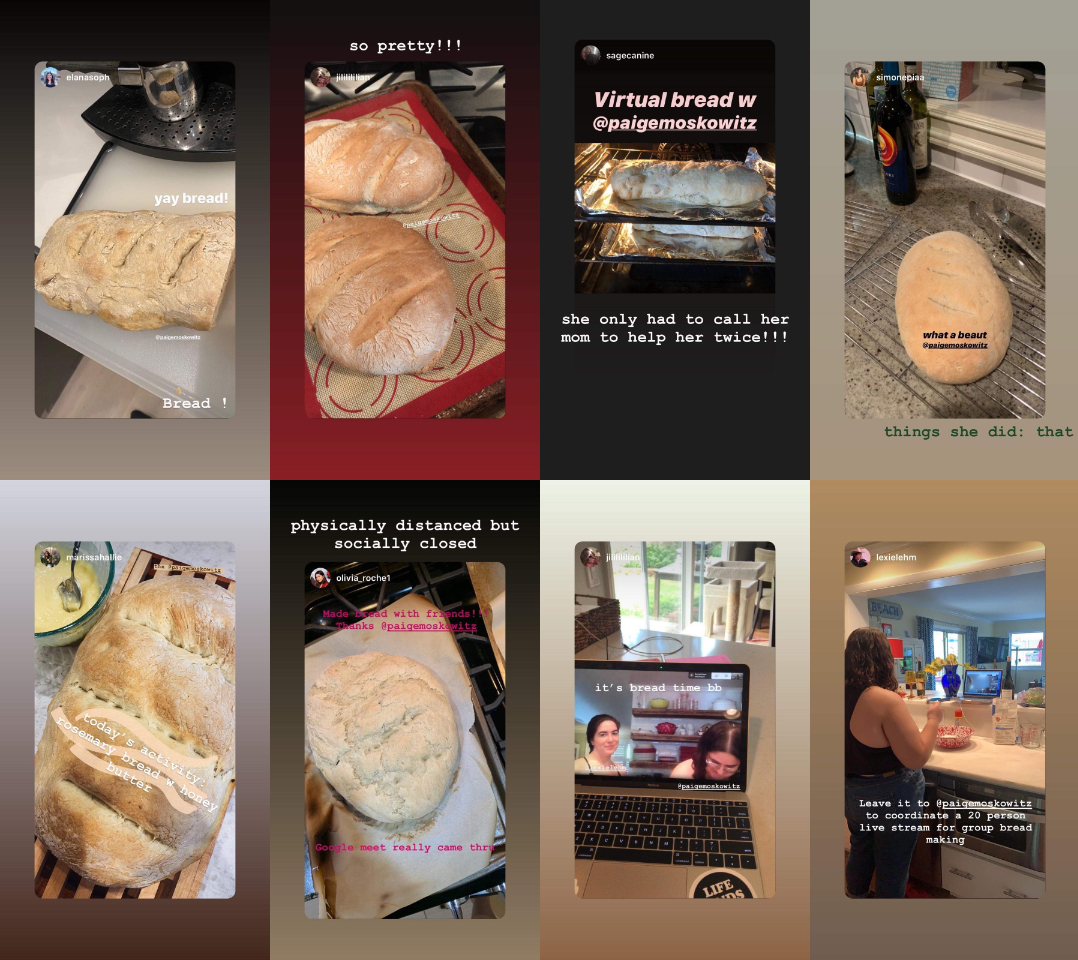 Oftentimes, one upside of a digital party is the inherent flexibility of who can join. Dinoor noted that part of the reason her powerpoint party triumphed laid in the fact that she could invite all of the funniest people that she knew—including friends from different stages of her life who would never have been physically present at a party on campus.

Similarly, Alex Siegal, a Columbia College junior, hosted a week of casual get-togethers he coined “kickbacks” from March 21 to 25. The kickbacks “became kind of an interesting project of merging friend groups.”

“The one thing they had in common was like, they all knew how to ‘make fun of Alex,’” Siegal says.

“Zarties” (Zoom-parties) don’t by design have to be intimate though. Schreder made sure to share her movie night events in general quarantine-Facebook-meme groups as well as Columbia-specific ones: The movie night was open to anyone who wanted to come. Like any good party, this meant in practice that a nice mix of people she knew and didn’t know attended.

By virtue of the internet, it is also possible to plan events with zero mutual friends. Kareem Abukhadra, a Columbia College senior, wants college students to take quarantine as an opportunity to broaden their social circles and make new connections rather than just endeavor to maintain old ones. Through his new venture Zoom with Strangers, he aims to match college students around the world with other like-minded individuals.

“I’ve always liked talking to strangers. I think people should talk to strangers more in general. So this project’s more about a continuation of that combined with the fact that COVID-19’s an issue,” Abukhadra says.

On the Zoom with Strangers website, the front page claims (under a picture of a dog in sunglasses), “Answer these questions and we’ll introduce you to the quarantined student you have the most in common with.” Participants are then asked to choose their favorite meme, their dream job, their favorite shows, and a few hobbies. Thousands of college students from all over the world have already opted in, at which point they are then connected with an assigned “stranger” to meet over Zoom a few days later. Abukhadra and his team apply algorithms to form pairings.

The dullness of quarantine has made experimenting with the discomfort of meeting a stranger a bit more appealing.

“I think it’s awkward, but it’s also something people are more excited about just because they’re stuck at home,” Abukhadra says. “I think what happened recently is there’s been a shift in social norms because of corona. And that’s pushing to be more open to these experiences.”

Through another lens, a large portion of college life is the experience of comfortably feeling like one anonymous face in a collective. There is something to be said about what Stan Liao, a School of Engineering and Applied Science junior, calls the “solidarity” of Butler at 11 p.m. Even in a sea of people you might only know peripherally, you are not alone. “Stay-at-home orders” in this way have uniquely eroded the areas sociology describes as third places. There are Zoom parties, and then there are Zoom classes. But where does that leave spaces like Ref and Joe Coffee?

Liao serves as an administrator for the Facebook group “Ref Spotting @ Columbia,” a popular Facebook page with over 1,800 members where Columbia students share pictures of friends “spotted” at Ref, as well as general Butler memes. Liao missed Ref, so he created his own Zoom version of it that is available 24 hours a day, every day. Members of the group who want to pop by and study around other people are welcome to join the always-active Zoom link at any time.

It isn’t a perfect recreation, Liao admits, but “it does definitely have that element of being in a place and knowing other people are there and there are people to speak to broadly. So that part has translated pretty well.” 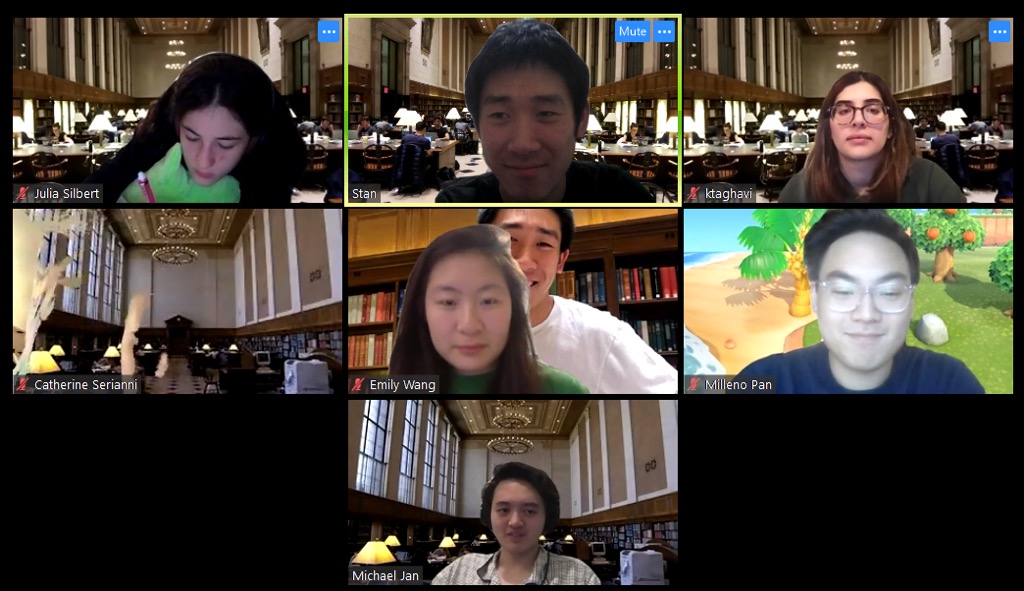 Themes and guest lists are only part of the equation though. Internet parties come with their own set of logistical challenges. For her movie nights, Schreder checks to see who has the easiest access to a particular title and then that party attendee can share his or her screen so the whole group can watch together.

“I think what’s fun about it is that everyone has their microphones off, but we’ve got the Zoom chat going so everyone is commenting on it,” she says.

Still, Zoom’s basic free plan only allows 40-minute meetings, which is usually not enough time to finish an entire film. To remedy these time constrictions, students seek out undergraduate teaching assistants, who often have access to Columbia Zoom Pro accounts that allow for gatherings without time limits. Alternatively, the timer can simply provide a natural conclusion. Rather than trying to plan a long gathering, Siegal’s “kickbacks” ended when the 40 minutes were up and were only intended to be casual catch-ups.

While not quite as risky as Zoom with Strangers, virtual parties even with close friends come with their own share of awkwardness. Over video chat, it is difficult for parties to segment into smaller groups. “I hadn’t realized until we got there that all of us had to talk to all of us,” Dinoor says.

“It got kind of weird in the beginning when people were just trying to go around and popcorn introductions,” she says.

A few days later, Dinoor attended a virtual birthday dance party. “Part of the fun in dancing with your friends or just dancing to music in general is that you’re not really performing. You’re just kind of grooving to the music. But on Zoom you really have to look at yourself,” she explains.

Figuring out which activities are perhaps just absurd enough to work, and which ask too much of partygoers, is an important mental calculation of quarantine. Individual tasks that can be done collectively are often better-suited for video chat. Columbia students engage in activities that offer structure but not restriction: craft circles, book clubs, and open mics.

“Honestly being in such a goal-driven, ambitious environment impacts the way people prioritize their time for better and for worse,” Dinoor said. “But I think right now we have so much time that people are willing to try weird things, new things, things in groups they would not have necessarily envisioned for themselves.”

In the future “I think people who didn’t prioritize social interactions as much might prioritize them a little more,” Siegal says. “I mean maybe I’ll go out a little more knowing maybe senior year will collapse.”

“I’m missing New York, so I’m going to attempt to make Levain’s famous chocolate chip cookies,” the Facebook event invitation reads. The kitchens of attendees tile the screen over Zoom. A few people are trying to follow the Levain recipe. One person is making double chocolate chunk cookies, while another just makes their favorite chocolate chip recipe. Somebody mutes their screen briefly because the mixing process is too loud. Parents drift in and out of frames, sometimes offering baking advice based on the progress they see.

During the school year, Gallagher-Cave and her roommates made a tradition of hosting dinner nights. But baking together, and with this group of people, is something new. Maybe, Paris offers, when this is all over they can go to Levain bakery together in person. In real life.

Enjoy leafing through our ninth issue!

Previous Issue | More In This Issue

Graduate Workers Went on Strike Without Union Authorization. What Will That Mean for The Future of Labor Organizing?
Cole Cahill

The View From the Bell Tower
Isabela Espadas Barros Leal